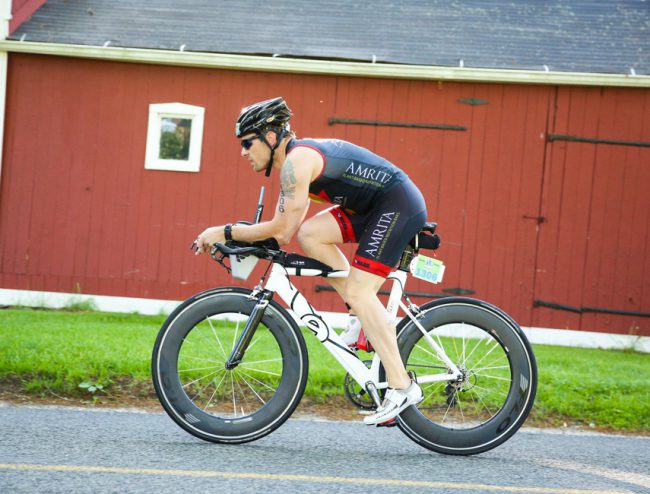 “I look at endurance sports in general, and especially triathlon, as one big math equation,” says John Newman, a cyclist, runner, and triathlete who launched the Family Sport Life blog in conjunction with his wife, Tara Newman. “You just have to figure it out, and that’s what I’m doing, slowly but surely.”

An engineer by profession, John woke up one morning a decade ago and realized the numbers weren’t adding up. Day after day he set his alarm early and pumped iron at the local gym before heading to work, but despite gaining strength, he was still overweight and carrying 230-235 pounds on a 5’7” frame. Without balancing his pre-dawn lifting sessions with a healthy diet or cardiac exercise, one day he hit the wall — hard.

“I don’t know what came over me or what changed on that particular day, but I just didn’t have any desire to walk into the gym again — ever again at that point,” John says. “The owner of the company I worked for at the time happened to be an avid cyclist and he’d just purchased what was then a brand new carbon-fiber bike. He still had his old bike around and he said you know what? Why don’t you give this a shot.”

Back to square one: progressing from not knowing how to step into clip-less pedals or inflate a Presta valve, soon John was hooked, joining in on local club rides. Only, there was still a problem.

“Here on the north shore of Long Island, it’s not mountainous by any means but we do have some decent hills and decent climbs, and I just couldn’t get up the hills,” John says. “I realized I needed to do something different, so that’s when I started looking at diet and looking at how I could train better. I started reading all the books on bicycle training, different diet methods, and basically how to become an endurance athlete.”

As John progressed in the club circuit, moving from the back of the pack to the front and into competitive racing, among the books he discovered was Andy Holgate’s Can’t Swim, Can’t Ride, Can’t Run. He describes it as “a very interesting book about a regular guy who has a job and is out there just trying to get across the finish line.” As John transitioned from cycling to training for his first triathlon, he and Tara created the Family Sport Life blog as a way to write about the balance of those elements: marriage, children, career, health, fitness, and fulfillment.

“The twist on the blog was that we were going to do it from a family perspective,” John says. “Because I felt that it wasn’t just me, the whole family needed to be a part of it and be supportive of it for it to happen. So, it started that way and I told my ‘fat-to-fit’ story, basing it on that. Before you know it my wife contributed more and we started getting feedback. We were only maybe a month or two into really writing when I crossed the finish line of a local race and someone was like, oh, I love your blog.”

“My wife, who was spectating at that race, was getting quite a bit of that also, which really encouraged us to go on,” John continues. “At that point she jumped to the front of the blog itself and through what we do — our mistakes and trials and tribulations and successes — we’re trying to help others find the balance between family, sport, and life.”

While Tara Newman — an organizational psychologist with an M.A. from Hofstra — applies the team-building, management, and organizational concepts from her day job to posts about nutrition and developing healthy habits as a family lifestyle, John focuses more on “training reports, training methods, and things that work and don’t work.”  To that end, one of John’s posts on Family Sport Life used the Recovery Pattern index on his Omegawave Personal to quantify his training benefits from Enduro Packs, a nutritional supplement designed to improve the efficiency of recovery.

“When I started on EnduroPacks, I marked the date on the calendar and decided to look at my Recovery Pattern for the next thirty days, sixty days, and then beyond. I saw an immediate increase in my time in the [optimal] green zone,” John says. “A lot of times I was in the higher yellow zone — so not in full-recovery after a session — and if I took it a little lighter that day, then the next day I’d be back in the green and I could go harder again. But I was always bouncing around the top of that zone. I found that once I started the EnduroPacks, with the same training regimen for the most part — in fact, the intensity started to get a little higher because I was getting deeper into the race season — I started to get a lot more days in the green.”

“Since that blog post, I did twenty-seven or twenty-eight days in a row right in the center of that green zone. In that time I think I had eight or nine days where I had a ten overall (Readiness) score — which I’d never had before. The only change I made is that I started using the EnduroPacks and getting a good balance of vitamins, amino acids, and electrolytes for recovery.”

In addition to keeping an eye on his Recovery Pattern, as John prepares to run the New York Marathon on November 2nd, he’s been utilizing the other indexes on his Omegawave Personal in order to manage and maintain an adaptable training program.

“I write out my schedule at the beginning of the week so I can see and plan my whole week rather than wake up in the morning and go what am I gonna do today?” John says. “But there are times when I’ll have scheduled an hour and a half run with thirty minutes of tempo, and I score a ten [in Overall Readiness]. If all my numbers are at the top of the charts, great — now that thirty minutes of tempo just became forty-five or fifty minutes. I’ll make that call just before I go out on the run. Or, instead of doing an easy aerobic bike session that I may have had scheduled, maybe I’ll swap that out for something with some hard intervals. Because I know on that day, if I do push myself, one way or another, I will get a benefit from it.”

Conversely, Newman also uses his Omegawave measurements as an objective affirmation on those days he suspects he should back off. On the Monday evening we spoke, he had just wrapped up a hectic weekend that included a sprint-distance race, attendance at a nighttime wedding, kids’ soccer games, and family errands, resulting in back-to back nights with less sleep than his norm.

“When I woke this morning I was laying on the couch taking my HRV — and this is 4:00 in the morning, because I have to wake up early and get my training done before I go to work — and my composite score was like a seven, which is low for me. I usually score an eight, nine, somewhere in that range. As I was laying on the couch I saw my numbers and my Adaptation Reserves were a little low, my Aerobic and Anaerobic scores were both trending downward and I said you know what? I’m going to skip today’s workout. My body was telling me I was tired and the numbers confirmed it. So I closed my eyes and went back to sleep in my running gear for another two hours.”

Gear was also on Newman’s mind as he described both the expected and unexpected challenges he faced in completing his first Ironman, combating lighting, torrential rain, and intense cold during this past July’s race in Lake Placid.

“It’s kind of sad, but I’ve always held the mentality that there’s no such thing as bad weather, there’s just ill-prepared athletes,” John says. “That’s something I’ve been preaching for a very long time. But I was ill-prepared on that day. The one mistake I made was that I didn’t even own a waterproof shell — I do now.”

After climbing out of Lake Placid, up to the altitude of the ski jumps from the Olympic courses, the Ironman bike loop included a descent into the town of Keene, NY; what was usually considered a chance to gain easy velocity instead became a test of all the months John had devoted to planning, blogging, and hard training.

“Typically, when you’re riding a bike and you see those road signs where they show a truck going downhill with the words ‘check brakes,’ you pound your fist and go YES! Well, on this particular day I was so cold that I was dreadingevery time I saw one of those signs. This was not a light sprinkle — the rain hurt when it hit you, that’s how heavy it was. I was squeezing the brakes as hard as I could and slowing down to twenty-something miles-per-hour. It’s a very big, steep descent, and normally everybody looks forward to it. But by the time I got down into Keene I was so cold my whole body was convulsing and I could barely control the bike.”

“When I got down into Keene — after over a year of training, after all the preparation and lead-up – I literally thought about handing in my timing chip and saying I’m done. I can’t do that descent again,” John continues. “All indications show I was probably hypothermic and my body had to fight just to stay warm and stay alive. Somehow I was still able to pedal the bike and by the second loop the sun was out. I started getting warmer and I felt better that time around, but then it caught up to me on the run. I expended way too much energy trying to overcome the cold and it hit me about halfway through the run. My muscles just couldn’t handle it anymore. I had all the aerobic capacity I needed — I wasn’t bonking or running out of energy in that sense — but I was running out of the strength to be able to run at a decent pace. It was definitely a trying experience — you have to get your first one out of the way just so you can learn. And I did learn — I learned a whole lot about myself, about training, about triathlon, about Ironman. In those 12 hours, I learned a whole lot.”