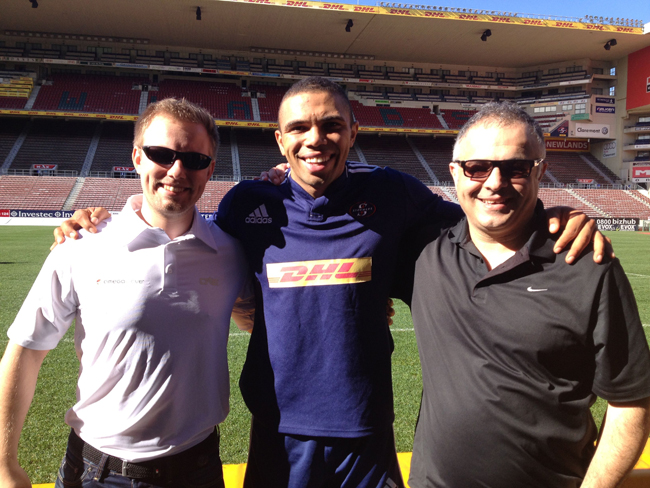 Bryan Habana may have been rugby’s fastest man, but there are some eventualities even he can’t outrun. Fans of Cape Town’s DHL Stormers and South Africa’s national team the Springboks have repeatedly watched Habana explode into the open green, accelerating to a gear that leaves nothing but more and more gaping lawn between he and the nearest pursuit. After signing a new contract to play in Toulon, however, the Springboks’ all-time leading scorer has been slowed by a serious hamstring injury. Now, looking ahead to his three-year commitment in France, the thirty-year-old speedster doesn’t just have to worry about outracing tacklers — he’s also competing against time.

“For me, getting to a point in the latter part of my career, it’s about managing your body correctly,” Habana says. “Going towards the latter part of your playing days — not necessarily to lengthen your career — but trying to understand your body and know the signs and symptoms, so if something goes [claps] like that, you know how should you react. It’s about understanding your body more and getting as much feedback as possible, and with a system like Omegawave you can do that internally.”

Before being welcomed as Omegawave’s latest ambassador, Habana was already familiar with the applications of the technology: the Stormers use the Omegawave Team system in their strength and conditioning program and the Springboks have conducted demo assessments during previous training camps. From that experience, Habana doesn’t merely understand the conceptual value of the data — after being helped off the field in Exeter with that thigh injury, Habana appreciates how every bit of information might make a practical difference between a minor strain and major surgery.

“With a physical sport like rugby, you definitely need to know how your body responds. A lot of times you go out there and you’ve got a knock, you’ve got a bump, you’ve got a bruise, and you’re not too sure how your body’s going to respond,” Habana says. “For me, the classic example was when I actually did my injury — my back stiffened up in the warm-up prior to the game, and looking back now, I’m thinking that could have been a cause for my hamstring coming off the bone. Whereas, if I’d measured with Omegawave, I might have known to warm up a little bit longer or do something more specific.”

At the time we spoke, Habana was taking a deliberate approach to rehab and had yet to resume running after his December operation. In addition to providing invaluable information for those coming back from serious injury, Habana praises the quick simplicity of the measurements — “it wasn’t something you needed to use for like fifteen hours a day,” he says gratefully — while also highlighting the unprecedented insight into his functional systems.

“Seeing the data you get back in terms of your body composition and in terms of the type of player you were, it’s pretty exciting to see,” Habana says. “I’d never seen stats like that before and it was different to see how something as simple as [an at-rest test] could provide so much data.”

The sport of rugby requires multiple coordinated skills and Habana is quick to point out that Omegawave shouldn’t be looked at as a standalone fitness solution; rather, he views the technology as “an integral part of a holistic system.” To that end, he says the assessments provide a new precision to the recovery process — where certain training decisions were once a matter of intuition, now he has an accurate picture of which muscle groups and internal systems are most fatigued and which can still positively adapt to increased training stress.

“Before, sometimes when you woke up in the morning and weren’t feeling good to train, you didn’t know whether it was a good thing to push yourself or if you were really getting the maximum performance out of training,” Habana says. “You might sometimes feel tired in the morning and you’re not too sure how that’s going to affect your training, or you might’ve had a great gym session and you’re not sure how that’s going to impact your program.”

While Habana considers injury-prevention to be Omegawave’s most immediate application for rugby coaches and players, overall he sees the technology as being a vital asset during rugby’s long, intense international season, where any edge, any angle, any extra burst of explosiveness can mark the difference between a successful try and a mouthful of turf.

“For me, [the key is] being able to totally understand my body and what it’s about and seeing how I can perform at my peak,” Habana says. “For any professional athlete, the difference between the best and average is very minimal, and you want to be performing at your best all the time. And to do that you need to be training properly and to train properly you need to make sure your body is responding properly — which is where Omegawave can play a big part.”