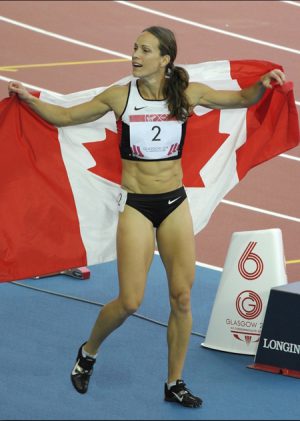 “My favorite part about it was that even though I had strengths and advantages in certain events, I still loved the challenge of trying to improve in all the others, and also that you always get three chances in long jump or three shots, so you can always try to do better on your next attempt.”

Canadian heptathlete Jessica Zelinka happened to be reminiscing about being in fourth grade and competing in her elementary school’s “Track & Field Day,” but she could just as easily have been talking about the growth mindset that drove her to a gold medal in the 2007 Pan Am Games, two silvers in the Commonwealth Games, and a career during which—this past summer—she narrowly missed the opportunity to represent Team Canada in the heptathlon for a third consecutive Olympics.

Always another chance, always the challenge to get better. Though the peak achievements of Zelinka’s career follow a linear path, the timeline of her training process has been anything but—giving birth to a daughter between her 2008 and 2012 Olympic appearances, and then enduring a period marked by diminished funding in the sport, family moves, and the logistical challenge of training in Canada with a coach based in Kansas. All this while needing to trust her body could withstand the demands of competing to qualify for the Olympics at the age of thirty-four.

“In my thirties, I really focused on the finer details of recovery, making sure I was always tuned in to my body and its needs. Keeping the essentials of recovery such as diet, sleep, water intake, and stress management at the forefront,” Zelinka says, discussing that transitional point in her career. “I had always been on top of those [essentials], but again it went back to trust issues that came out because I was in a place in my career where I was having a lot of doubts. Am I okay to push it now? Is my hamstring really injured or is it just feeling tight. What can I do? Is it worth it? I know I can only get treatment once a week, so do I push myself or do I play it smart…”

Atop all those pesky anxieties hung the even larger doubt that begins to plague athletes at a certain point in their career.

“…Should I even still be doing this?”

A two-day undertaking, the heptathlon stacks one speed and power event after another, requiring endurance, resilience, and relentless focus. Day one includes the 100m hurdles, high jump, shot put, and 200m; day two moves on to the long jump, javelin, and 800m. Zelinka’s early mentorship in the sport was guided by an Aunt who coached high school track, instilling the desire to compete in a range of events rather than specializing in just those events she was likely to win. Moving on to a professional career, Zelinka has needed to perfect a variety of takeoffs and landings, the mechanics for throwing different implements, techniques for jumping and sprinting, all while maintaining her base of speed and strength. 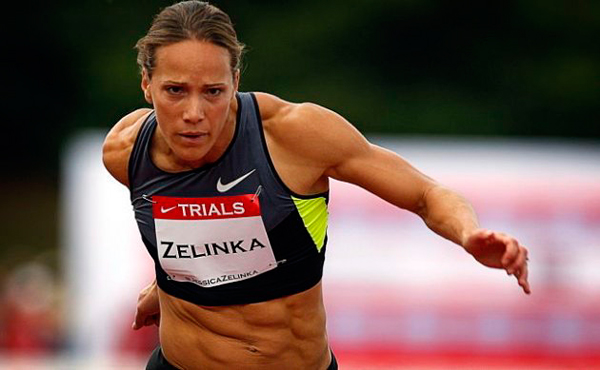 “There’s always something to work on,” Zelinka says. “You want to touch on each event every week, at least once, just to reconnect the muscle-memory. Not even to learn or to improve, just to remind yourself about what you’re trying to accomplish and the motor patterns involved, and sometimes you don’t even need to throw an implement. I can go in the shot put circle and do a couple glides, run through my main cues and some visualization, and I know some athletes who will go on the runway for five minutes just to reconnect with the long jump, then go on to the next event.”

Beyond the challenge of tracking her progress in seven separate events, Zelinka faced new issues in the stretch following the 2012 Olympics in London. Moves to Montreal and Connecticut led her to start a new journey, leaving the coach she’d had for a decade and beginning to train under the guidance of another great coach, but remotely. While she credits a trusted support system with stepping up and being there for her training and medical needs, for the first time she was—literally—training alone. Not only was her personal coach in a completely different geographic state, she worked out by herself at the track, without a consistent partner to provide motivation, pacing, or extra subjective feedback.

During the year that she was training to qualify for the Olympics, one of Zelinka’s supporting coaches, Andrew Parr, suggested she try using Omegawave Personal to help monitor her response to training and to account for off-the-track stressors impacting her readiness to perform. 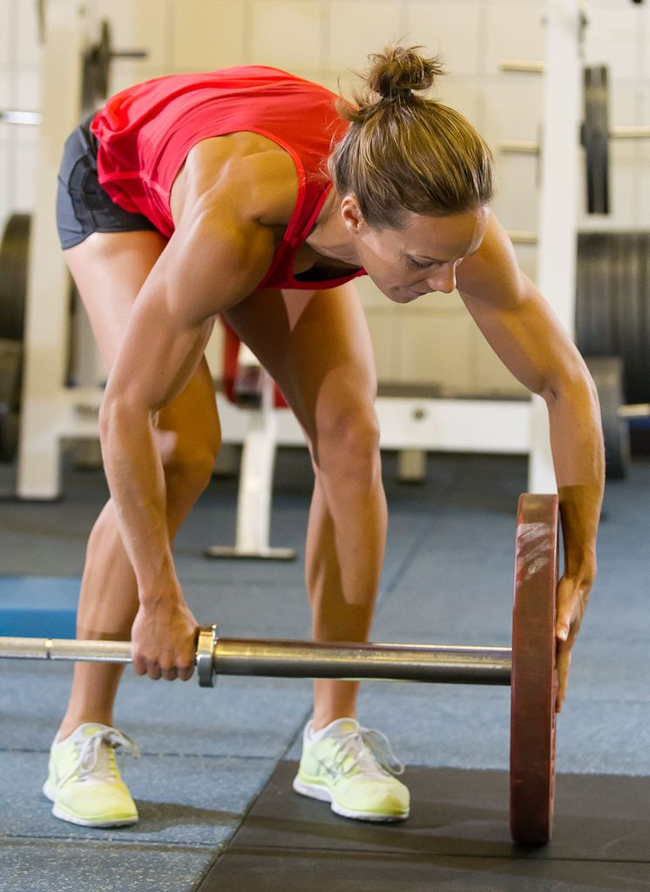 “What I really liked about the device was the option to write notes after each assessment,” Zelinka says, of the iPhone app. “That was awesome, being able to write down how I was feeling and then correlate it to the test results. So I might note that I slept a certain amount of hours, or I didn’t drink as much fluids the day before, or I was feeling a tightness in my calf—everything that seemed important. I wrote a note with each [test], and I’d include if I though it was a good workout or if I woke up tired that morning. Then, if I got to a spot in my training where I was feeling like I was starting to get burned out, I could go back and see my notes and see when I felt that way, what did [my results] look like? How did that feeling compare with the way Omegawave was tracking how my body was doing?”

“Over the years, I got to used to checking with my coach for instant feedback, instead of checking in with myself first for my own feedback,” Zelinka says, reflecting on how she handled taking more responsibility for her own training sessions. “Learning to check in with myself was good, so that I could internalize everything that was going on and how I was feeling. Through my training, analyzing technique on my own, video, all that was good… but on the other side it was a bit of a detriment at a point, because I was over-analyzing and trying to over-coach myself. As an athlete, I think there needs to be a balance—you want the analysis, but you never want to interfere with the flow of your movements and what you’re trying to accomplish.”

Zelinka credits the experience of going through labor and becoming a mother with giving her a deeper understanding of her body’s natural capabilities. Not only did she feel more connected to her body, but she also learned that she had the capacity to come back from a training hiatus and progress back to an elite level. Still, even with that grounding, even with her major accomplishments on the track, trusting her body day in and day out was not always a given. On the one hand, there was the longstanding mindset: You can always try to do better on your next attempt. On the other, the question: Should I even still be doing this?

“There were times when I thought that I wasn’t responding well to the training during the week, or coming back the next day I wasn’t feeling as recovered as I should be,” Zelinka says. “But then, in the morning, if Omegawave showed my results were fine, I could be like okay, I’m good. That let me know that maybe I was mentally a bit tired, because I was doing something repetitive or trying to work through something technically, so maybe mentally and emotionally I was a little bit down, but physically I was still good

“[Omegawave] definitely gave me the confidence to just go and get the work in and know that even if mentally and emotionally I wasn’t as sharp, still it was an opportunity for me to work on things and know that it wasn’t a physiological issue due to training. It isolated my physical capabilities and gave me a chance to get my mind around it and change my attitude a bit.”

During the preparation process, Zelinka primarily applied Omegawave on the recovery side—reinforcing how her own habits and patterns affected her readiness to train. In one instance, she even tracked an undesired rise in her resting heart rate and downward trends across other key parameters to support her instinct that she should skip a particular competition and avoid the risk of overtraining. On the performance level, though, she also found ways to use her assessment results to let her know that she would be able to rise to the occasion when it mattered most.

“Omegawave helped me gain trust so that when I went to competition, I knew I could deal with anything,” Zelinka says. “For example, one day I had a hard session on what was day eight of ten days of a training camp. We had a really hard sprint endurance workout planned for the afternoon, and I took an Omegawave assessment, but at first I didn’t look at the results. Because I didn’t want to know. Although I was tired going into the workout, I was still able to push it and dig deep into my reserves to finish strong. Then I went back and I looked at the results, and it showed that I was the lowest I’d ever been in pretty much every parameter. That helped me realize that no matter how I’m feeling, whether I’m one-hundred percent ready or not, I can still dig deep and perform when I really need to. If it’s the last event of the heptathlon and I’m going in to the 800m, you’re never going to feel fresh at that point. It confirmed what I already knew on one level but didn’t always have the confidence or trust in. Omegawave gave me the proof that it was indeed possible to perform at my best even when I felt beat and tired.” 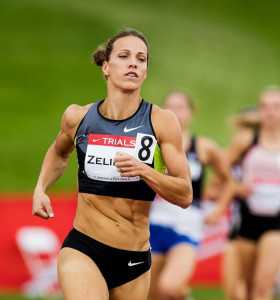 Always another chance, always the challenge to get better—not long after coming up just short in her last opportunity to qualify for Rio, Zelinka was right back on the track. Rather than monitoring her own training, this time she was coaching others, teaching proper training methods, injury prevention, and using her knowledge of nutrition, lifestyle habits, and personal accountability to help others find the connection to their bodies she applied in her own career.

“When you have a good connection to your body, I think you’ll improve in every facet of your life,” Zelinka says. “And that’s what Omegawave does—it connects you more to your body. You’ll become more respectful of your body, you’ll eat better, you’ll want to go to the gym—and not just go to the gym, you’ll want to push yourself to see how your body responds. You’ll appreciate that your body is super-amazing and you’ll be connected to that—and, you’ll learn to listen to it.”