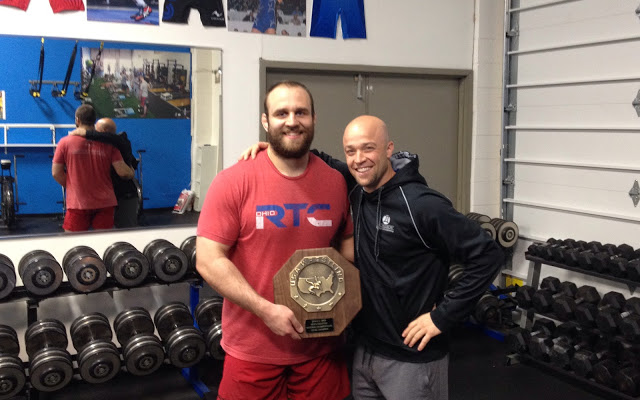 The Donskovs know hockey. Father, mother, brothers—stretching from Ohio to Canada, Anthony Donskov’s family tree has extensive roots teaching and growing the game. While other close relatives focus on the technical and tactical side of the sport, Anthony’s specialty is high performance—he is a former assistant strength and conditioning coach for the US Women’s national hockey team and is the founder of Donskov Strength and Conditioning in Columbus, Ohio. In that latter capacity, in addition to training players to generate greater speed and power on the ice, Anthony Donskov also coaches athletes to deliver and withstand force on a completely different surface: the wrestling mat.

“These wrestlers are the elite of the elite,” Donskov says, describing a quartet of wrestlers currently training at his facility, a group that includes Rio-bound heavyweight Tervel Dlagnev and 3-time Ohio St. All-American JD Bergman. “And what I see with a lot of combat sports athletes—and not just wrestling—is a mindset that is tough thing to crack. Number one: suffering is a right of passage—if it wasn’t hard, it wasn’t productive. Number two: regeneration and recovery are for wimps. Last but not least—the harder the better. These are really tough conceptual beliefs to dismantle when these athletes train as hard as they do, because that’s how they were brought up to think during the duration of their respective careers.”

While developing a reputation for incorporating scientific strategies and progressive technologies into his training methodology, Donskov began to “crack” the issues he and his staff face by having a simple philosophical basis for everything they do at his facility.

“Number one, and this is basic for us, regardless of the athlete—whether you make a hundred million dollars or you drop your son off and he’s twelve years old—and I think it should be the bedrock of all programming: do no harm.” Donskov says. “So, number one, nothing happens in the weight room. There’s always a risk/reward, and our job as strength coaches is to keep our athletes healthy. We want to constantly assess that: do no harm. Number two, our goal is to keep the athlete healthy on the ice, on the mat, whatever venue they perform in. And last but not least is performance enhancement. That really is the bedrock and foundation of how we think when we train our athletes at our facility.

“From a philosophy standpoint, with regards to strength and conditioning: Number one, big rocks: 80 percent of our results are going to come from 20 percent of our exercises. We’re very principle-based… exercise physiology, strength and conditioning 101, obviously the principle of overload, the principle of specificity—and for us, that means n=1, that means that every nervous system that walks through our door is different, is going to respond to training differently, and our goal is to find a way to dose that person effectively. Cause and effect is part of our philosophy, we want to build symmetric athletes—all things being equal, we want to pair our patterns (knee-dominant, hip-dominant, pushing-pulling, etc). Last but not least is variable reduction. We want to have consistent loading parameters and few exercises. Why is that important? Well, in any scientific experiment you’ve got an independent variable and a dependent variable—cause and effect. And, the goal of any good experiment is to try to limit all the extraneous variables, so you know what worked and what didn’t.”

From that “bedrock,” Donskov then tailors his programming to meet the specific demands of an athlete’s chosen sport. For a 275 lb. wrestler like Tervel Dlagnev—who Donskov describes as being the size of ‘a small SUV’—the coach is concerned both with developing power and increasing the ability to display that power across two fiercely-intense, three-minute periods.

“Our big rocks are going to be pulling heavy things from the ground. Our big rocks are going to be pushing and pressing heavy things. The variables I would say that get more specific to wrestling: grip work—we use fat bars, we use ‘beam bars,’ different grips for chin-ups or vertical pulling exercises. We implement cannonball grips, and candlestick grips. In addition, we do a lot of loaded carries for time—what I call ‘strongman endurance.’ In terms of auxiliary protocols: isometric contractions, band work for the neck, static holds, but that never replaces the hard work that happens in the weight room in terms of our big lifts.”

Consistent with Donskov’s science-based approach and commitment to do no harm, he maintains a regular monitoring protocol to individualize his programming and track each wrestler’s adaptation to training, competition, and other stressors.

“We use Omegawave every day with Tervel,” Donskov says. “We want to see his Readiness… we’re looking at DC Potential every day, and his HRV for his autonomic nervous system. His Recovery Pattern, his Adaptation Reserves. And finally, we track his aerobic Readiness. If that is trending in a negative direction, we may throw aerobic mini-blocks into his program or focus on parasympathetic restoration.”

In order to better understand the factors that cause such negative trends to show on Omegawave’s indexes, Donskov first tested the system on himself, seeing how his own body responded to everything from specific training stressors to a late night out for cocktails with friends and colleagues. While addressing “red” flags tends to be the most immediate use of the data, having utilized the system at his facility for a year, Donskov now also uses the technology to push further ahead.

“There are times we’ll see consistent green readings—even over weeks at a time—where I say to myself as a strength coach, am I giving these guys the physiological load they need at this time, or do I need to step on the gas a little bit more?” Donskov says. “The great thing about Readiness, and John Kiely said it eloquently… it’s not just about seeing trends in terms of what to pull back, it’s also about seeing opportunities of when to push down the gas pedal.

“Any time we pull information and gather data, we may be vulnerable to make rushed decisions,” Donskov continues. “You have to gather good information and start seeing trends before you start using that data acutely. I think what I found was that a lot of times I would have a hard training session or training block planned for these guys, where there might be high intensity, high volumes, and for me… when you’re getting a week, week and a half of all green, I might be thinking to myself, am I really pushing these guys as hard as I need to push them right now? Because quite frankly, I would expect some of these windows to be yellow or red. So, as a strength & conditioning coach, how does that effect us? Well, it can effect us in several ways, with the immediate variables we’re responsible for: load, volume, rest periods, even exercise order (at times). So those are all things we’ve tinkered with. For high end athletes, it’s an experiment of one. It’s N=1. And, that body is going to be different every day it walks in.”

For athletes competing in combat sports, every time their body walks through the front door there’s a likelihood their limbs, core, and central nervous system may have recently endured a bout of high intensity, full contact work from a technical practice or live grappling session. To factor these uncontrolled variables into the equation, Donskov and Dlagnev collaborate on a subjective method for assessing external loads.

“I ask him to rate his days in terms of measures of perceived exertion,” Donskov says. “Was it an eight or a nine? That’s a high intensity day. Was it a six to eight? That was a medium-intensity day. Or was it a five or below? And how we break it down, those high-intensity days we call ‘developmental.’ Those medium days, where his RPE is six to eight, we call these ‘stimulative days.’ And those days where his RPE is below—for example, if he’s been doing technical drilling—we may call those ‘low days’ or ‘recovery days.’ And with Tervel (who has been competing much longer than most University wrestlers), he has a hard time sustaining the workloads of a twenty-something. So what we try to do is have no more than three high-intensity days a week…we really want to focus his recovery efforts just as hard as we train.”

In terms of adapting to the added internal load that rises from the unpredictable conditions of competition like the Rio games, Donskov cites the advantage of Dlagnev’s extensive travels and prior Olympic experience. Team coaches, doctors, and physical therapists will be on hand to offer advice on everything from dealing with time zone changes to maintaining proper hydration. In the meantime, Donskov will continue to focus on the variables that remain under his control.

“I will train Tervel up until he competes in Rio. It’s a fluid approach—it’s a process-driven approach. It’s an approach where the micro dictates the macro. I’m not looking at the end and reverse-engineering the process. I’m looking at the week and taking a step-by-step process until we get to Rio.”