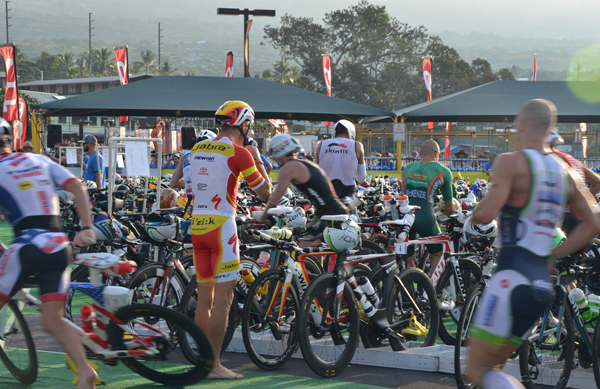 Everyone should experience at least one true sporting event. Not simply a match or a game or a contest, but an event, that field where the elite of a particular sport come to compete on its ultimate stage. From the Super Bowl to the Champions League Final, these events extend far beyond the run of play, spilling across weeks that bring disparate masses together in the spirit of rivalry, camaraderie, and athletic inspiration.

This past week, Omegawave was honored to participate in a full slate of activities at Ironman Kona, the one annual race every triathlete marks in bold on their calendar. First a 2.4 mile open-water swim over the teeming reefs of Kailua Bay; then a 112 mile bike across the lava fields and scenic vistas of the Kona coast; and finally a full marathon that winds to a finish through the panoramic curves of Ali’i Drive.

The theme of Kona’s 2013 Ironman, Mohala i ka wai ka maka o ka pua (Unfolded by the water are the faces of the flowers), served as a reminder to appreciate both the natural beauty of the island as well as the faces of all those people who make the event special — and triathlon truly is a sport of the people. Ironman is a contest of will and want — you don’t need to be born with a rare gift of size or height or speed. Instead, the desire to sweat, grind, and endure offers athletes of all ages and backgrounds an opportunity to share the same course as those professionals racing at the sport’s highest level.

In order to acclimate to the time zone and the tropical humidity, athletes begin arriving on the island as early as their schedules will allow. For Omegawave, the festivities kicked off with the Parade of Nations on the Tuesday before Saturday’s race. That night, Ali’i Drive swelled into a global village as participants danced and flew their country’s colors, marching into the Expo grounds where the Omegawave tent was right in thick of the action. Music and joy and expectation filled the air as the crowd weaved through the village of tents and booths, the biggest brands in the industry on hand to showcase everything from carbon wheels to shoe-lacing systems to performance gels. Yes Ironman is a sport of the people, but those people know how to seek out every product that might provide an edge or lessen pain during their grueling hours out on the course.

Because of this, from our tent we were able to introduce countless athletes to the Omegawave personal system and watch how they instantly grasped its potential, from maximizing their peak training to managing recovery days to providing accurate measurements for their pre-race taper. Just a lava rock’s throw from the water’s edge, we proudly welcomed brand new Omegawave users spanning everywhere from Colorado to Great Britain to Turkey to Australia.

In addition to meeting so many competitors, the Omegawave team was also thrilled to shake hands and break bread with many of the leading voices in the triathlon community. One morning we listened in as Luis Vargas — co-founder of new Omegawave partner MarkAllenOnline — stood on the pier and discussed practical strategies for the swim; the next we joined the MarkAllenOnline team for a breakfast at the King Kamehameha Hotel, where six-time Ironman winner Mark Allen inspired the attendees with stories of his last win on the course. A fantastic story of a memorable day, one that required all the heart and resolve Allen could muster as he chased down a man thirteen years his junior, making up a four minute differential over the final eight miles of the marathon.

Throughout our week in Kona, time and again the Omegawave team marveled at this unique quality: how accessible Ironman’s greatest ambassadors remain on behalf of their sport. From the Omegawave tent, we heard Gordon Haller — the winner of the original 1978 Ironman — reminisce about how he went into his hotel room and took a shower between the swim and bike of that very first competition; we watched two-time winner Chris “Macca” McCormack sign autographs and stand for photos with all comers; we stood in the midst of a Q&A that brought Macca together with Sebastian Kienle and Rachel Joyce (who would go on to finish 3rd and 2nd respectively in the men’s and women’s pro races).

This great sense of tradition permeated the 35th edition of Ironman Kona, peaking during the E Komo Mai (Welcome) Banquet. Polynesian fire dancers and Tahitian drums kept the energy level high, but the focus remained on the people — the triathlon community — with recognition paid to the 5,000 volunteers who make the event possible and the trailblazers who dreamed up the event. During the banquet, we were just one table away from John and Judy Collins, who organized the first Ironman in Hawaii with 15 daring entrants — including their sixteen-year-old son Michael, who returned to compete in the 2013 competition along with Gordon Haller. Among the guests at our table, we had the opportunity chat about training techniques and European triathlons with a congenial German amateur, Christian Mueller, who two days later topped the 40-44 age group with a blistering time that beat over half of the professionals, including pre-race favorites Pete Jacobs and Craig Alexander.

What other competition has a 40+ amateur running neck and neck with the pros? 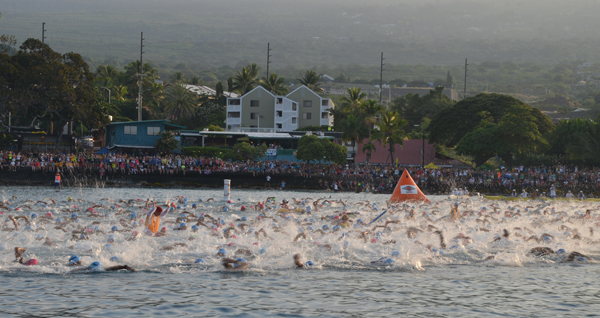 The drama of race day did not disappoint. After a curious sea turtle poked his head from the water to see what we were all doing out on the pier, cannon fire sent over 2,000 entrants into their strokes, a mighty churn of limbs and water that looked like nothing outside of a widescreen nature film. Moving on to the “Hot Corner” (an intersection on the downslope of Palani Drive), we watched a three-ring-circus of unfolding stories: bikers coasting into their final curve as some runners headed into the marathon’s first turn and others began to dig into a crucial uphill stretch.

Eight to ten hours may seem a long span for a spectator, but on the course there was no downtime — whether cheering the fastest as they transitioned between events or pulling hard for those last age-group entrants to beat the cutoff times, the hours flew by until we moved on to the finish line and rooted on all the athletes we’d come to know throughout the week

That finish line is a remarkable sight. All the agony has taken place in the heat and pain of the course — unlike the shadow of defeat that hangs over most competitions, everyone who crosses the finish line at the Ironman has won a victory over the limits of human endurance. Clapping along with a jubilant crowd, we watched women’s champion Mirinda Carfrae shine as she sprinted to the fastest marathon time of anyone in the race. We watched Omegawave ambassador Jens Dahlman running proud and strong to the finish, passing on his way another competitor who could barely keep both knees facing forward, totally spent with an exhaustion that would have had the man TKO’d from every boxing ring on the planet, yet still — somehow — he maintained verticality and momentum for that last hundred yards before collapsing across the finish line.

Amazingly, out of over 2,000 entrants, 95.6% made it across that finish line. Among those was Harriet Anderson, at 78 the event’s oldest finisher. Despite a mid-course bike crash that sent her headlong over her handlebars, Anderson finished just under the seventeen hour course cutoff time, beating her previous year’s time by two minutes. During the award ceremony at Sunday night’s Banquet of Champions, the loudest cheers were reserved not for the fastest or the strongest, but for Anderson and Minda Dentler, the first female to ever complete the course using a handcycle — a huge chorus of cheers for those athletes who endured to beat the greatest odds.

On the podium, Anderson said she never makes a final decision about competing in Kona until the spring, but not even a full day after gutting out nearly seventeen hours on the course, she laughed and admitted she already had her eye on returning to the island in 2014. As does Team Omegawave: having wrapped up a fruitful and exciting week, already we’re imagining the possibilities for next year. This is an event that’s not to be missed.