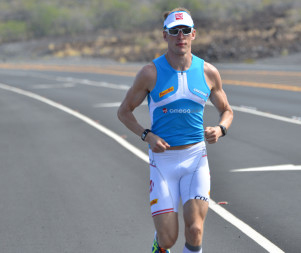 My name is Jens Dahlman. I’m 33 years old. I’m a husband and a father. I’m a pilot. I’m an athlete. I am an ironman. This is the story of my road to the 2013 Ironman World Championships in Kailua-Kona, Hawaii (Read Part 1 HERE).

We arrived at the beautiful island of Hawaii on Sunday, a week before the race. I went through a few easy training sessions early in the week to acclimate to the difficult race conditions and everything felt surprisingly good. The notorious winds on the long ride out and back from Hawi were not present (at least on Monday), and the heat didn’t feel that bad. Still, the winds on the Big Island vary on an hourly basis and it was an Ironman we were about to do on Saturday, not some 8k jog. Nevertheless, I was trying to keep in a positive frame of mind.

I completed my last key workout on Wednesday: three 15-minute intervals on the bike, followed by a short (3k) iron-paced run. Before the workout, my Omegawave showed me in the green zone with a readiness value of 8, so I was set. I felt very strong when pedalling and it was difficult to run so “slow” at 4:15/km! I was ready to race!

The last two days before the race, I took it easy training-wise but was still quite busy with registration, briefings, and all the other race formalities. In addition–thanks to Omegawave’s new partnership–on Thursday morning I had the chance to meet a living legend, 6-time Ironman World Champion Mark Allen. Incredible!

My primary goal for this season was to qualify for Hawaii; from there, the plan was to enjoy Kona and scout the race for the future. With my stellar season and all the good results that I’ve had, however, I was getting hungry for a bit more. I even had secret hopes for a top-placement in my age group, which I knew would require finishing close to the top-sixty overall. I would have to climb my way up the field after the swim, but on a normal day my running wouldn’t be an issue and I could definitely count on my bike performance. The only big question mark was how I would cope with the hot and humid conditions.

As a relatively weak swimmer, I was a bit worried about the non-wetsuit swim start. In previous races I’ve been pushed below the surface in a mass start, and without the buoyancy of the wetsuit those concerns resurfaced. I tried to find a tranquil spot on the left side of the start line and stayed away from the front. When the cannon fired, I avoided sprinting and settled into my own rhythm. To my surprise, there was none of the crowded feeling I’d experienced in previous Ironman starts. It seemed everyone at this level knew what they were doing, swimming in a straight line at an even pace. I actually enjoyed swimming and the underwater view was spectacular, with all the colourful fish and coral.

The halfway point came quickly and according to my watch I reached it in an even 30 minutes. On the way back, I started to feel the effort and felt my technique gradually reverting to the old and slow. There must have also been some currents or winds to fight since my total time was close to 1:08. For me, anything under 1:10 in an ocean swim without a wetsuit is acceptable, so I was satisfied.

The bike course started with a twitchy section around the town centre in Kona. That pleasant, uncrowded feel of the swim quickly vanished–pretty much everybody seemed to be packed out on the course. Normally I’d be flying past the field–constantly on the left lane–but here there was no room to do that. I was stuck and had to ride below my target zone until we got on the Queen Ka’ahumanu Highway, which took about 12 km. From there the road was wider–leaving more room for passing–but there were still so many competitors in the limited space that it was a lot of on-off action in terms of power. This, of course, is not the ideal way to ride an ironman bike-leg, but there were still plenty of kilometres to cover, so at this point I wasn’t too worried.

Usually, it takes a while until I start to feel really good and powerful on the bike and I was expecting this to happen here as well. However, my legs still hadn’t started to work the way I was used to when we got to the halfway turnaround. I don’t know if it was because of the heat or all the pumping motion to fight for space on the road–probably a bit of both. At the turnaround, I had spent 2:28 on the bike course and it was actually 96 km into the ride: all the descents that I had just climbed riding to Hawi were now ahead so everything looked okay. There were a lot of athletes in front of me, though, so I’d really have to concentrate on keeping the pace up.

Getting back on the Queen K from Kawaihae, the winds began to pick up. What were supposed to be descents felt like flats and all the flats felt like uphills! At the same time, I was starting to struggle to stay in my target heart rate zone, dipping under all the time. A few days earlier Mark Allen had warned me about this and his advice in this case was to take in calories, immediately! So I started to refuel ahead of my planned 20-minute intervals, but it obviously takes time until the energy gets back into the muscles. In the meantime, I had to try to endure out in the lava fields with the strong headwind that had developed. I was losing time quickly.

The final 20 kilometres seemed to take forever and I was struggling with thoughts of failure and the possibility of dropping out. Finally, I got back to the center of Kona and transition for the run. I felt really disappointed, as I knew that by this point my hopes for a high placement were all but out the window. I changed into my running shoes nevertheless, as much out of pure mechanical habit as anything else.

Running well after the bike has always been the strength of my triathlon performance, and thankfully my run did not disappoint. Right after the transition, I saw my wife and daughters cheering me on, all happy to see me. I felt an immediate boost and all thoughts of calling it day were gone in that instant. After dragging them all the way here, I couldn’t let them down now! I quickly kissed the girls and started running. After that I was catching athletes’ backs like Pacman. I had a good time running and could keep a strong pace of 4:20/km. After the first 15km, I started to walk a few meters at the aid stations (which were about a mile apart), helping to ensure proper hydration and energy intake.

There always comes a rough patch somewhere on the run course, but as with Ironman racing in general, that obstacle is mostly mental. This time, the feeling struck when I was running out of Kona towards the Natural Energy Lab. I saw the first age groupers coming back already and realised just how far back I was. My mind wandered for a short time, feeling all sorry for myself: “That’s where I should be, running with that guy. But I’m still here, a good 30 minutes back”. But then there was another voice from the other shoulder: “Stop dreaming! You can still hit that 9:30 mark if you hang in there.” I decided to listen to the latter and pushed the pace.

Coming back into town, I was in a hurry to make it. I ran the last two kilometres at a pace of 4:00/km, speeding down Palani Road like a sprinter. On Ali’i Drive, I saw the crowds of people cheering on the finishers, the street covered with text like the climbs of the Tour de France. I couldn’t help but smile and feel that I should enjoy the moment for just a little longer despite the clock. I walked the last five meters up the ramp to the finish line and soaked in the atmosphere. Then I heard the announcer call out: “Jens Dahlman, you’re an Ironman!” I felt good.

While I didn’t perform at quite the level I was hoping for, I’m still happy I competed in the race. Perhaps I had too high expectations for myself, or maybe it just wasn’t my day for whatever reason. In the end, I feel humbled by the class of the athletes in Hawaii. Mediocrity isn’t part of the vocabulary if you want to succeed in Kona.  I’ll definitely use this experience to fuel my future training and racing, so next season expect to see me stronger and faster in a triathlon near you!